The North wall to the left of the Reaper Chapel dates from the 12th Century. The window in the west wall is known as the Reaper window.

A new Altar under the Reaper window was dedicated by the Rev. David Gamble during the Christingle Service on 20th December 1987. The Reaper Chapel was created to encourage the use of the Church as a place of private prayer.

In 1966 work was carried out to the North wall, the oldest part of the church, and when the floor was removed an old stone archway was discovered, the purpose of which is not known. It may have been an archway into a family vault or an escape route or, as rumour had it, the entrance to a subterranean passage to Creakers, the old moated Manor House to the east of Renhold Wood. However, when the ground outside the North Wall was dug to a greater depth than the Arch, during drainage repairs in 2002, nothing was found.

The Credence table to the right of the Altar was carved by Mr David Paul of Renhold and donated to the church in September 1998 in thanks for the warm welcome extended by the Church to David and Mary Paul on their arrival in the village. The Table is made from English oak and the design reflects the details which exist on the older furniture within the church, particularly the Prayer Desk. 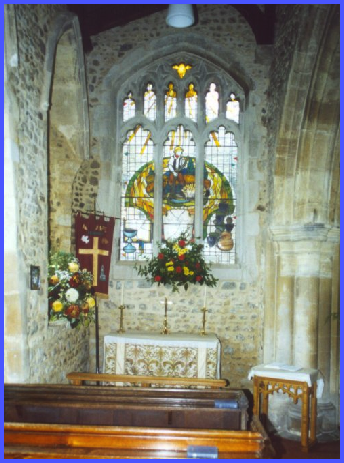