The small window in the North Aisle has a red shield with three picks on it. We believe it dates back to 1336. On 4th April that year John Picot, son of Michael Picot, Knight, established a chantry for the souls of various members of his family together with King Edward and “William late Vicar of Ronhale” (see Clergy list from 1229) 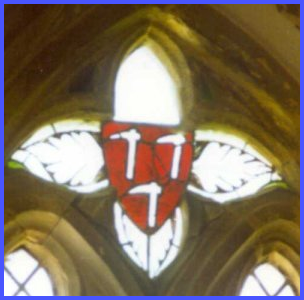 The arms of the Picot/Pycot/Piggot family were Argent three picks sable, in other words three black picks on a white background. Why are the colours different? We believe the reason is what is called differencing. A son needed to have arms which resembled, but were different from, his father’s. In early times this was done by keeping the design but changing the colours. John’s father, Michael, will have been entitled to the black on white design. The white on red design will have been John Picot’s. Both of them used the canting or pruning design, the picks suggesting the name Picot. If you look very carefully outside you can also see the Picot arms carved on the tower just under the parapet.

In the 14th Century it was believed that masses sung for a person’s soul would assist his passage through Purgatory. Rich people would endow a chantry with its own priest to sing mass for them while poorer folk had to make do with leaving some money for an occasional mass, or a light at the altar, or to have their names on the beadroll, the list of souls prayed for in Church

Quite often a chantry would include a separate chapel, or a special altar in the Church. We do not know whether John Picot had either of those. We do know from the Victoria County History that his chantry was “annulled” around 1385. However, his window survives and commemorates him over six centuries after his death.

The Data on Renhold Chantry, compiled from the Lincoln Diocesan Registers by F. A. Page-Turner, is as follows: