The first War Memorial was located in front of the old School, now a private residence in Top End, to commemorate those who died in the First World War. Until 1910, Renhold suffered badly from endemic typhoid; in that year Cecil Henry Polhill of Howbury Hall financed the piping of clean water from Biggleswade to Renhold and every house in the village was supplied with clean water.  A fountain (above) was also then erected by C H Polhill. A commemorative stone (in the brickwork) was engraved and erected by grateful villagers. 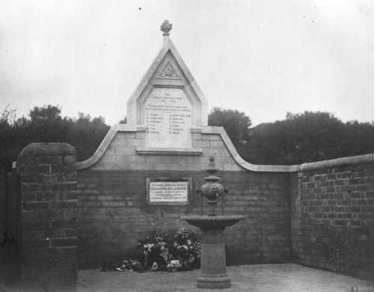 In 1919 the villagers, by public subscription, erected the Memorial in a stone surround as seen to the left 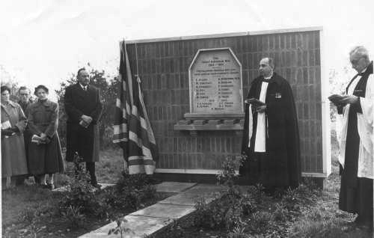 The family lived in a cottage at Tithe farm opposite the Church.

W CURTIS, Thomas Walter Curtis, Private 204477 1st Btn Hertfordshire Regiment died on Saturday 23rd March 1918 and was buried at Ste. Emilie Valley Cemetery, Villers-Faucon, Somme, France, Grave reference III. F. IS. Husband of Mrs L.E. Wootten (formerly Curtis), of 2 Farrar Street, Kempston. Thomas, known as Walter, was born in Renhold and the family lived in the house opposite the entrance to Becher Close. Walter was the son of Samuel and Ursula Curtis. They are buried in All Saints churchyard (plot L35).

A DUNCOMBE MM, Alfred John Duncombe, Lance Corporal 33795 8th Bn. Bedfordshire Regiment died on Thursday 19th April 1917 aged 20 and whose death is recorded at Loos Memorial, Pas de Calais, France, Panel 41. Son of Mrs A F Duncombe of Howbury Cottages, Renhold. In All Saints Churchyard, there is a gravestone (plot K16), barely legible which reads “In Loving Memory of, …… and Anne Duncombe who passed on March 23rd 1933 aged 67 years, Also their son Alfred killed in action in France, April 19th 1917 aged 20” Alfred was the eldest child of five children of Amos and Anne Florence Duncombe. Amos was born c.1869 and died on 25th March 1906 and Anne was born c.1868, the daughter of Mr and Mrs Alfred Ashley of Pulloxhill; she died on 23rd May 1935.

S KIRBY, Sidney Charles Kirby. Private 200728 1st/5th Bn. Bedfordshire Regiment died on Sunday 26th August 1917 and was buried at Gaza War Cemetery, Israel. Grave Reference XXII. A. 16. Sidney was the son of John Thomas Kirby and his wife Jane; John was called Thomas to differentiate him from his father who was also called John. They lived at 5 St Margaret’s Cottages in Renhold.

For a time Herbert was a Police Officer in London but by 1907 had married Elizabeth Agnes Lovell, who lived with her parents at Salph End Farm. They had seven children.

Parish Registers of All Saints