There are three Memorial Tablets to members of the Becher family of Howbury Hall on the north wall of the Chancel.

This is the Memorial to Sir William Becher, situated to the right of the door into the Vestry.

An approximate translation of the Latin is as follows:

In especial hope of a joyful resurrection near to this stone lies buried WILLIAM BECHER of  HOWBURY in this village, Knight Son of OLIVER BECHER, Esquire, and in addition grandson of WILLIAM BECHER Knight and ELIZABETH his wife who was the daughter of OLIVER Baron St John of Bletshoe and sister of OLIVER first Earl of Bullingbroke

His wife was ELIZABETH (Widow of) THOMAS HILLERSDON in the county of Middlesex, Esquire

By her he had children WILLIAM JOHN and GEORGE and a daughter ELIZABETH of whom JOHN, deceased by his example of outstanding piety and modesty of temperament  with gentle honesty of habit and generosity of character surpassed even his father, himself pleasing God and faithful to his King, country and people He lived beloved by all, and died widely mourned on the fifth day of December in his sixty-fifth year in the year of our Lord 1694

To the left of the door into the Vestry is the memorial to Elizabeth Becher, the only daughter of Sir William above.

In hope of a resurrection to life immortal Near this marble lies inter’d ye body of Miss ELIZABETH BECHER only Daughter of Sir Wm Becher late of Howbury Kt.

By his Lady ELIZABETH Relict of THO HILLERSDON of ELSTOWE Efq. Daughter of JOHN HUXLEY of EDMUNTON in MIDDLESEX, Efq. She was a perfon of a Mild and ferene temper, Prudent, Modeft, Courteous and Obliging in her Conduct, Converfation, conftant & devout in ye exercifes of Piety, fervently obfervant of duty to her parents, kind and  affectionate to all her relations thus deck’d with ye Ornaments of a meek & quiet fpirit she Refigned her foul to God that  gave it on ye XV11th  of April in ye year MDCC1

The final Becher Memorial is further to the left of the Vestry door and is that of William Becher, husband of Elizabeth Clark. William was a descendant of Sir William above. 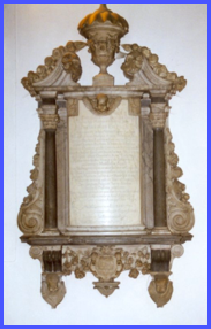 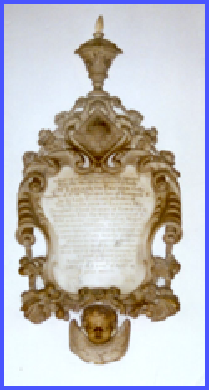 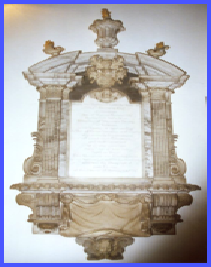