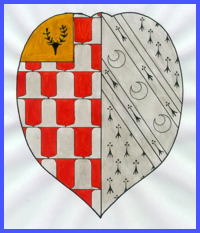 Henry’s family came from Bishops Morchard, Devon. He was born c.1517 and the youngest of eleven sons; all but Henry died without issue and he became heir to the family’s lands in Kent. Henry married Alice Heron of Edgecombe House, Croydon, Surrey, the daughter of Thomas Heron and Elizabeth Bond . Henry was of All Hallows Parish, Broad Street, London but by 1560 also of the Parish St Christopher le Stocks. Henry and Alice had ten children.

Henry born c.1542 in the parish of All Hallows, Broad Street, London

Fane born c.1546 in the Parish of All Hallows, Broad Street, London. He married Susan, daughter of George Dabridgecourt of Stratfield Say, Hampshire on 12th May 1572 and died c.1596

William born c.1548 in the Parish of All Hallows, Broad Street, London. He married, by licence dated 12th April 1578, Judith, daughter of John Quarles of London. William was then of Old Jewry and Judith of Islington. They had a son, Sir William Becher, Clerk of the Council.

Bartholomew born c.1550 in the Parish of All Hallows, Broad Street, London.

Mabel born c.1553 in the Parish of All Hallows, Broad Street, London. She married Sir Richard Norton of Tisted, Hampshire

Dorothy born c.1555 in the Parish of All Hallows, Broad Street, London.

Henry, secondly married, Jane, widow of Oliver Lovebond of London, in 1568, the Marriage Articles dated 5th May 1568. They did not have issue.

In the Church of St Christopher le Stocks is a memorial which reads:

“Here lie the bodies of HENRY BECHER, Alderman and late Sheriff of London: and ALICE, his first wife, one of the daughters of THOMAS HERON of Edgcombe in the County of Surrey, Esquire, by whom he had ten children, After the decease he married with JANE the widow of OLIVER LOVEBOND, of London, with whom he lived for three years, and died on 15th day of January, Anno Dom. 1570”

The son of Henry Becher was also Henry. He was of London and Fotheringay, Northants, born c.1542 in the Parish of All Hallows, Broad Street, London. He married Judith Riche on 15th May 1566; Judith was the daughter of John Riche of London, gentleman and Apothecary to Queen Elizabeth, and Anne Kelk; they married in London on 9th July 1547. John Riche was the son and heir of Thomas Riche of Marston Morteyne, Bedfordshire.

In 1597, Henry bought the Rectory and College buildings at Fotheringay from Gamaliel Crays

Edward baptised at St Christopher le Stocks on 3rd August 1577 and later of Peterborough and Longthorpe. He did not marry.

Elizabeth baptised at St Christopher le Stocks on 28th August 1580 and married Thomas Anscell of Great Barford, Bedfordshire at Fotheringay on 17th August 1602. She was buried at Great Barford on 19th September 1652

George baptised at St Christopher le Stocks on 17th April 1587 and later of Clavering, Essex. He married Elizabeth Whytney and they had issue.

Sir William, the son of Henry Becher and Judith Riche above, was baptised on 12th September 1574 at St Christopher le Stocks, London. He was later of Fotheringay, Northants and Howbury, Renhold. In 1603 he acquired Howbury from the Gostwycke family of Willington and in that year, he presented Rev. Henry Gale to the living of Renhold. He was Sheriff of Bedfordshire  1612 - 1613 and knighted by Kong James 1 in Kirby on 27th July 1619. He had married Elizabeth, daughter of Oliver, Baron St John of Bletshoe, at Southill, Beds on 25th February 1594.

William sold the Rectory and College property at Fotheringay to John Browne of the Middle Temple in 1629.

William and Elizabeth had nineteen children:

Ollife baptised at St Christopher le Stocks on 23rd May 1596

Dorothy baptised at Bletsoe on 15th April 1600 and married at Fotheringay on 16th Janaury 1626/27 William Conyers, of Walthmstow, Sergeant at Law. She died in 1659

Henry baptised at Fotheringay on 2nd May 1602, who by Anne, his wife had three children:

Anne baptised at Renhold on 9th October 1603 and married at Fotheringay on 26th August 1624 Edmund Hardinge of Aspley Guise, Bedfordshire. She was buried there on 10th August 1659

Elizabeth baptised at Renhold on 9th March 1605/06 and did not marry.

Judith baptised at Renhold on 29th November 1612 and did not marry.

John baptised at Fotheringay on 9th May 1622

Howard mentioned in his father’s will

Sir William was buried at Renhold on 22nd December 1640 and Elizabeth, his wife, was buried there on 17th September 1658. In his will he left, inter alia, money to the Vicar of Renhold, Nathaniel Hill, and the poor of the Village

They had ten children:

Sir William the son of Oliver Becher and Elizabeth Tate was born on 24th April 1628 at at Fotheringay, Northants at about 4.00 a.m. and baptised at Fotheringay on 5th May 1628 He is also referred to by has father Oliver in the 1634 Visitation as aged 6. He was admitted Pensioner at Trinity College, Cambridge on September 17th 1645. He, firstly, married at Renhold on 15th February 1655/56 Frances St John, daughter of Oliver, Lord St John of Bletsoe, who was baptised at St Bartholomew the Great on 9th April 1626 and buried at Renhold on 17th September 1658.

On 16th November 1660 he was knighted at Whitehall and was MP for Beds in 1667. In 1660 William was one of the Magistrates who sent John Bunyan to prison.

William and Frances had two children:

Elizabeth Their only daughter, Elizabeth, known as Betty was born on 4th March 1662 and baptised at Renhold on 12th March 1662/63. She died unmarried of Smallpox on 17th April 1701 and was buried on 22nd April.

William died on 5th December 1694 aged 65 and was buried in the Chancel of Renhold Church on 9th December. At the time of her death, Elizabeth, William’s wife, was living at Bow, Middlesex; she died on 12th January 1704/05 and was buried at Elstow, Bedfordshire on 20th January.

By William's will of 10th December 1691, he wished to be buried in the Church, with the rest of his ancestors. He left £5 to his brother Francis and to his brother, William, and his wife, £5 each for mourning. To his son George and daughter Betty the like sum.

William Becher, eldest son of Sir William Becher and Elizabeth Hillersdon, nee Huxley, was born on 4th January 1661: However no record of his baptism has been found.  He married, on 3rd September 1695, Mary, daughter of Matthew Dennis of Kempston, baptised at Kempston on 12th September 1673.

William and Mary had one son:

Jane Rachel born on 12th July 1700 at about 2.00 a.m. at Kensington and baptised on 9th August 1700. She married Thomas Lewis of St Pierre, Monmouth, c.1719 and had a son Craven who was baptised at St Pierre on 1st August 1729, and three daughters – Frances, Elizabeth and Jane. Craven married Mary Longford at St George, Mayfair, London on 14th October 1752. Jane and Thomas had another son who must not have survived childhood.

William was the only son of William Becher and Mary Dennis, born at about 1.30 p.m. on 2nd October 1697 and baptised at Renhold on 8th October 1697. He married at St James, Clerkenwell on 16th June 1726, Elizabeth, aged 30 and daughter of John Clarke of Hackney, Middlesex.

William and Elizabeth had no children

William in his will of 1748 left Howbury, after Elizabeth’s death, to his nephew, Craven Lewis, second son of his sister, Jane Rachel Lewis, provided he took the name, Becher, and adopted the Coat of Arms – see above. If Craven did not survive, the Estate was to pass to the surviving male child of John Becher, his cousin, citizen and salter of London, namely Robert, John and Richard.

Elizabeth, in her will of 1766 appointed her niece, Catherine, wife of William Abney as sole Executrix.

The Estate of Renhold, Salph End and Goldington passed to the second son of John Becher, the son of Sir William Becher, in 1766.

John married Mary Trucker, the third daughter of the late Samuel Trucker, Consul to Alicante, Spain and they had one son

John was alive in June 1773 for he prepared a list of all the families of Renhold in that month. However, he must have died soon afterwards. For some reason his son, William, did not succeed. John’s brother, Richard, succeeded.

Richard appears in the Parish Record referred to as Richard Becher Esq. at the baptism of a servant in 1774. In the sale document of the Estate, Richard is “late of Bedford Square, London, who hath lately left the United Kingdom for the East Indies”. Richard needed to sell the Estate in 1781 to pay off several mortgage debts totalling £17,500 (£1,235,000 in money of 2000). The Howbury Estate was thus sold to Nathaniel Polhill in 1781 for the sum of £17,500. This sale ended the Becher connection with Renhold, which began in 1603