The inscriptions and marks on the bells within the Tower are as follows:

It seems likely that there have been five bells at Renhold since 1657-8, the date of the old five-bell frame. Two bells cast in 1658 by Christopher Graye of Ampthill survived until 1979 and these may have been part of a complete ring of five supplied in 1979. One (the present fifth) was recast by Thomas Russell of Wootton in 1721. The tenor has been recast twice, once in 1775 by William Emerton of Wootton and again in 1890 by Taylor of Loughborough. The present fourth bell - cast by Hugh Watts II of Leicester and dated 1624 - was incorporated in the ring in 1979 to replace an uninscribed bell of poor tone. It came from Little Harrowden, Northants. The previous bell in the Renhold ring was believed to have been cast in the eighteenth century.

The founders, dates, notes, diameters (inches) and exact weights (cwts., qrs., lbs) of the bells are as follows:

The frame and hangings the bells hang in a cast iron "lowside" frame supported on steel girders. The frame was made by John Taylor & Co of Loughborough and installed in 1979. The bells are hung for full-circle ringing and fitted with cast-iron headstocks, fixed steel gudgeons, ball bearings, traditional type wheels, traditional stays and sliders, and clappers suspended from independent crown staples. The fittings are also by Taylors and date from 1979 but the old wheel centres have been reused.

A stone tablet inside the south window of the belfry records details of the restoration of the bells in 1979. It is inscribed

TO THE GLORY OF GOD / FOR OUR 750 YEAR ANNIVERSARY, JULY 1979 A.D. / THE REMOVAL OF THE 1657 WOODEN FRAME, AND THE INSTALLATION OF THE NEW STEEL FRAME / DONATED BY PETER AND JACK JOYCE, WAS / ACCOMPLISHED BY LES, RAY AND ALAN LOCKE, / JIM NORTHCOTT, BRIAN WOOTTON, / MARCUS STRONG, AND NICK PROUDMAN / TOGETHER WITH GRAHAM KNIGHT OF M/S TAYLORS. / THE SIXTH BELL WAS DONATED BY MRS E. M. WARE

A separate inscription records the renewal of the belfry louvres.

The old bellframe and fittings

The old oak bellframe removed in 1979 was a typical seventeenth century frame with sills, main braces and long frame heads. There were nine vertical posts. The frame had four parallel pits containing bells swinging north-south and one transverse pit on the south side.

probably relating to the construction of the frame in 1657.

The five bells had been rehung with new fittings by John Taylor & Co of Loughborough in 1890. These consisted of elm headstocks, plate gudgeons, plain bearings in iron housings, traditional wheels with iron wheel stays, traditional stays and sliders, and independent crown staples. At the same time the canons of the four old bells were removed.

The bells were rededicated on 30th January 1891, the event being recorded in the Bedfordshire Mercury 7th February 1891 and Bell News 21st February 1891 (p 570).  From 1939 to 1946 the bells were not rung and before ringing could take place the steps had to be cleared of many barrow loads of pf twigs which the rooks and jackdaws had taken through the slits in the stair wall. In 1957, Mears and Stainbank of the Whitechapel Bell Foundry provided a new teak headstock for the second bell which was then rehung on ball bearings. Around this time a decision was taken by the then Church Architect, Major Gedge, to support the beam, which was broken, under the spire by putting two 10-ton concrete beams under the oak beam. When next rung, the tower had developed a pronounced sway. The bell chamber door used to swing and bang all the time with a very pronounced movement in the ringing chamber. By 1975 the movement of the frame was so bad, and damaging the tower walls, it was no longer safe to ring the bells.

In 1976 Peter Joyce, who was then Churchwarden, called in Taylors of Loughborough and  commissioned them to build a new frame, adding a sixth bell donated by Mrs Ware. When the bells were taken down by Taylors, Peter Joyce and his brother, Jack, took the bells on a farm lorry to Loughborough to have the two which were cracked recast and all of them tuined. Mr Victor Farrar, by then the Church Architect, insisted on the bells being lowered several feet to counteract the damage being done by the weight of the concrete beam supporting the spire, making it a very big job. At the same time the steps to the ringing chamber were replaced and the slits were glazed, so keeping out the rooks and jackdaws. This work was undertaken in 1978 in time for the 750th Anniversary of All Saints Church.

1979 Pamphlet to commemorate the 750th Anniversary of All Saints

The names on the 3rd Bell are: 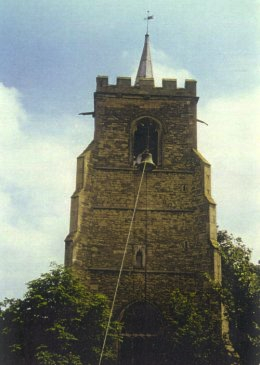 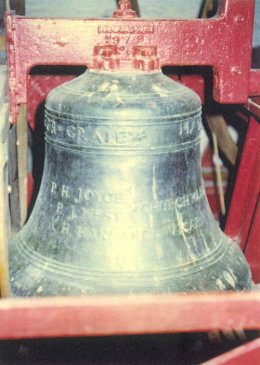