The Organ and Organists

The 1862/1863 renovations of the Church included the acquisition of a harmonium placed in the Chancel and in 1889 a Bevington barrel-organ “a nice little organ” was acquired to replace the harmonium and placed under the Tower, to the west of the Church. It was first used at a Service on 18th July 1889. In 1891 it was repositioned in the North Aisle. It remained there until 1952 when, after considerable debate, it was moved back under the tower.

In 1957 the “Bevington” was sold for £12. The ornamental pipes for scrap metal; the wooden case riddled with woodworm and the keys worn and discoloured. It was a one manual organ, with pedals and four stops. It was, however, unique because a cylindrical attachment enabled eight hymn tunes to be played automatically by simply turning a handle – a blower had to be pumped by hand. In 1947 a boy was paid £2.12s a year to pump the organ. The tunes played automatically were: Old Hundreth, Hanover, St. Stephen, Angels, Thy will be done, Devises, Shirland and Tallis’ Evening Hymn.

The Choir Stall was replaced on 9th and 10th July 1957, followed by the dedication of the organ on Saturday 13th July by Rev. G. N. Garrard, Rector of St Cuthbert’s, Bedford. 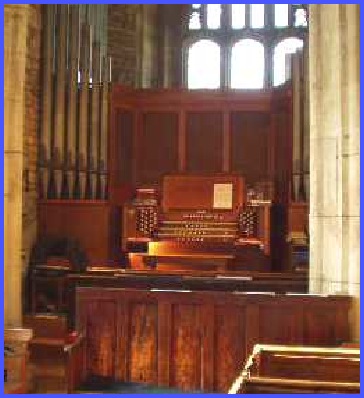 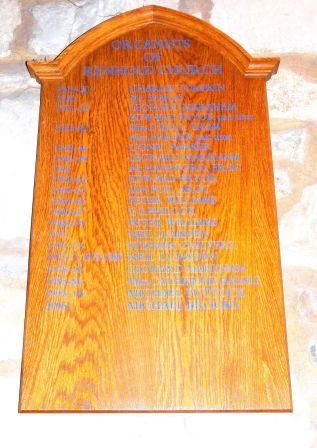 There was a short service, conducted by Rev. Lewis William Kemmis, Vicar of Renhold, followed by an organ recital given by Mr R. B. Payne, organist at St Peter’s, Bedford

The Wright organ had 28 draw-stops with pedals and electric action; no pipes were visible in 1957. Since 1957 the organ has been considerably improved with couplers to the three manuals, extra stops (now 32), a new electric blower and two swell pedals. It is now a very fine instrument.